Alex Kidd In Miracle World DX PS4 Review – Brace for a thump of nostalgia, because Sega’s long forgotten first mascot is back on the scene. Alex Kidd In Miracle World DX is a remake of the 1986 Alex Kidd game that many older fans will remember as the game that was built into their Master System. Developed by a small indie team (affectionately named Janken Team, after Alex Kidd’s Janken battles), the classic Sega game can now be relived with a modern facelift.

While it is great to see Alex Kidd brought back for a modern audience with a game so true to the original, it is indeed warts and all. The techniques used to renovate the game are a real testament to how far video games have come, but the source material undeniably hasn’t aged all that well. There’s a near irresistible temptation to look at the title though the rose tinted glasses of nostalgia, but by all objective standards, the source material was nowhere near being an apex platformer.

There is no overstating the night and day difference that has been made by the enhanced visuals. In fact, you can actually compare the modern look to the original, with the press of a button. Pressing R2 instantly reskins every element, exactly in place, to the original aesthetic of the 1986 Miracle World. That includes every sprite, backdrop, and even the sound effects. It’s a really nice touch for long time fans, but otherwise a slightly pointless bit of functionality.

The sprite work is a delight. All characters and enemies now have a much more distinct anime look. Similarly the backdrops and world map have been given far greater detail. As a result, there’s a much greater sense of the characters and the world that the game takes place in, and a level of immersion that wasn’t really possible in the original. 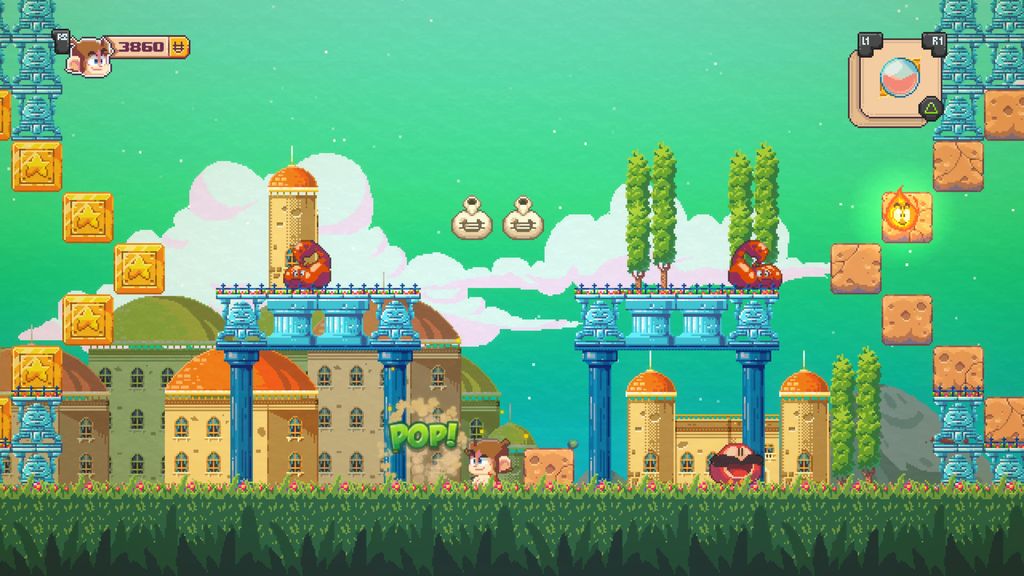 Various effects have been included that really add to the charm of the experience. Onomatopoeic speech bubbles appear whenever you land an attack, along with the rumble function to give a really satisfying feedback for your efforts. The janken (rock, paper, scissors) boss battles have also been given a much needed facelift with a new animation screen that appears right before you throw your fist. All things considered, Janken Team have brought a style to the series that would stand well in any of the great 2D platformers. It would be interesting to see what they could achieve on an original title.

Unfortunately, there is only so much Janken Team can do to improve the Alex Kidd experience without fundamentally changing how the game works. One change that would have been very welcome, is to address the issue with the controls. The player sprite’s movement has always been a bit slippery, always sliding a bit further than you anticipate. It inevitably makes an already very difficult game that much more punishing.

Alex Kidd in Miracle World DX is certainly a “get good” game if ever there was one. Most enemies are placed so awkwardly as to require a particular strategy to get round them. A lot of trial and error is involved, and the stakes are high. Just like the original, in a time before saves, you are returned to the beginning on losing all of your lives. Considering the slippery movement mechanics, it’s not difficult to imagine how brutal of an experience this can be. Thankfully there is an infinite lives option, but comes at the expense of some trophy unlocks. 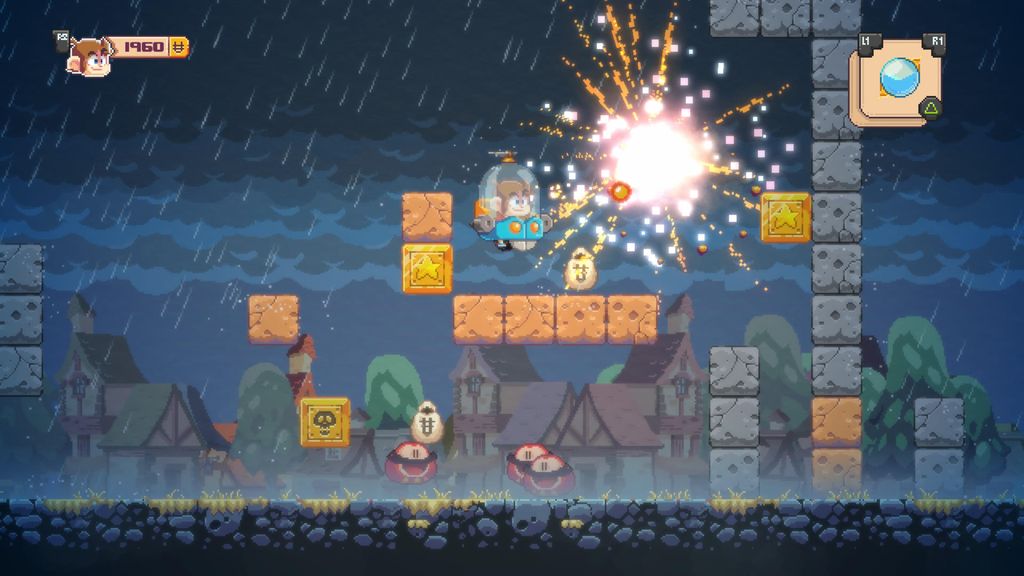 Back in it’s heyday, what Alex Kidd lacked in its core mechanics, it made up for with some innovative gameplay variance. On certain levels, you can drive vehicles, including a helicopter and a motorbike. Additionally you can purchase, or find special items in the game. The fire ring is always a useful item, but there are more bizarre ones that are rarely practical.

For instance, you can buy a magic capsule that creates lots of mini clones of yourself, but there’s rarely a point in the game where you’re surrounded enough by enemies to make use of it.

The little deviations in gameplay caused by the various items and vehicles was what made Alex Kidd in Miracle World stand out as an exciting platformer all those years ago. However, in modern times, these features are fairly standard for platformers, and video games in general. What you’re left with is a fiddly and frustrating, yet aesthetically charming retro game, that is probably more patience testing than any nostalgic thrill it might generate.

Sadly the problems with Alex Kidd In Miracle World DX’s source material don’t stop at game mechanics and item practicality. The structure of the game is really odd. The first level is as arduous as any, and then the next is literally a nice easy bike ride. The difficulty spikes feel all over the place.

Similarly, the boss battles are strangely placed. The first 3 boss battles are just a game of rock, paper, scissors, and the ridiculous punishment for losing on pure chance, is returning the beginning of the level. These frustrating occurrences can thankfully be curtailed by acquiring an item that lets you see what your opponent is thinking. However, they never make you feel like you’ve really accomplished anything. Fortunately, later in the game you do encounter actual boss fights, but they are quite deep in. 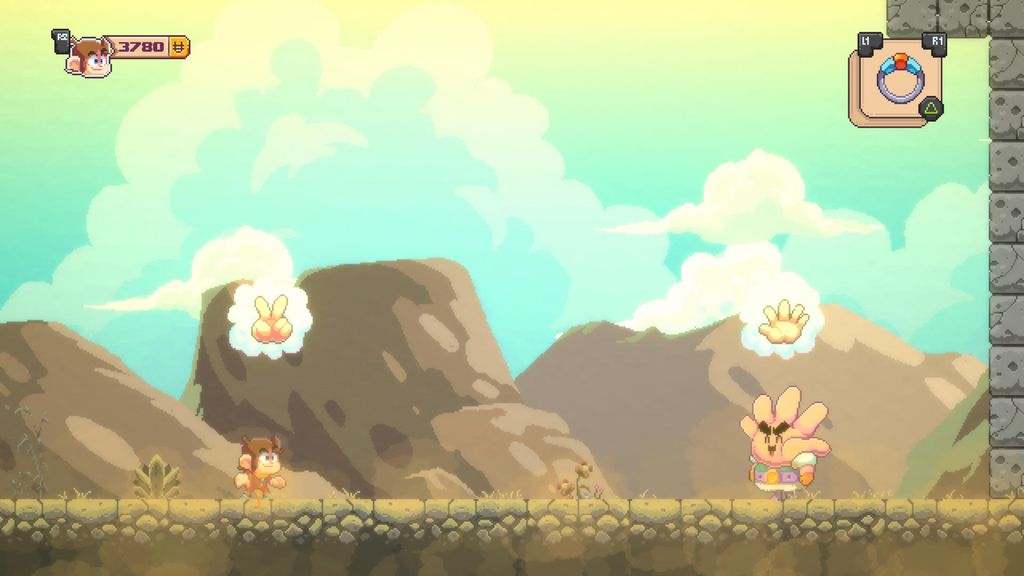 If your patience can somehow endure the madness that this game will throw at you, there is a nice addition that Janken Team have managed to integrate. Alex Kidd in Miracle World now has a more fleshed out story, and various NPC’s that can be interacted with on the way.

Alex Kidd is a martial artist that discovers he is the lost prince of the kingdom which has been usurped by the evil Janken the Great. The inclusion of more dialogue in the game really adds to the world building, and makes for added continuity in the overall experience.

Assuming the infinite lives option is active, the game can be completed in a few hours. However, this is assuming an already trialled playthrough can overcome possibly one of the most tedious obstacles in platformer history. In the last level of the game, there is a section where you must swim in the tightest gaps between rows of spikes. As already established, the controls of Alex Kidd are nothing to celebrate, and when combined with this particular challenge, it could just be too much frustration to overcome. 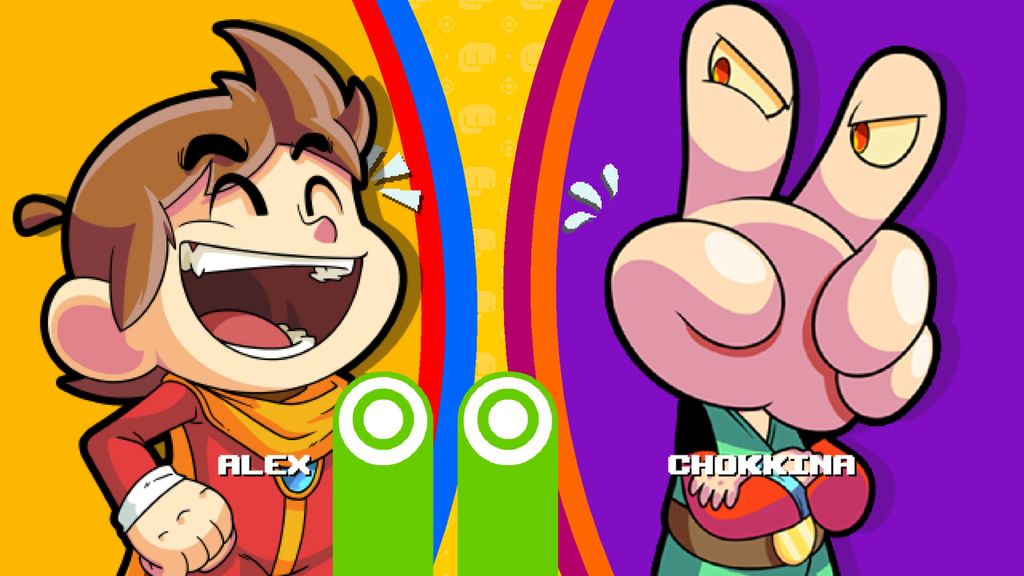 A Fine Renovation Of A Badly Aged Game

What we have here is certainly the definitive version of Alex Kidd In Miracle World. The charming sprite models, updated effects and added story elements unquestionably elevate the retro platformer above its station. Sadly, these are all merely layers of proverbial polish on Sega’s long forgotten turd.

Clearly there’s good reason Alex Kidd was passed over as Sega’s mascot. The spine of the experience is just nowhere near the level of Sega’s more renown classics. For those who are prone to the nostalgic seduction of reliving retro titles, then Alex Kidd In Miracle World DX is the essential version of the game. For everyone else, we can be happy that a piece of gaming history has been enshrined as such, but perhaps it would be better if it was locked away in a virtual museum somewhere.

Alex Kidd In Miracle World DX is available now on PS4 and is playable on PS5 via backwards compatibility.

Exploring The Abyss in In Death: Unchained for Oculus Quest

Ubisoft’s Skull & Bones is being reworked with live game …