Psychonauts 2 PS4 Review – I remember playing the first Psychonauts, and it well very fittingly blew my mind. It was witty, very unique and scratched that 3D platforming collectathon itch that, let’s be honest, does not get scratched often enough.

My thoughts going into the sequel were excitement and trepidation in equal measure. I wanted Psychonauts to feel like the original and not get modernized too much, so that it doesn’t lose the charm and personality I remember so fondly.

Psychonauts 2 from Double Fine Productions follows the tale of Razputin “Raz” Aquato, a young acrobat come psychic who, in the first game, helps his childhood heroes – the titular Psychonauts – rescue some trainees and agents from one of his summer camp mentors.

In Psychonauts 2, which follows directly on from the PSVR title Rhombus of Ruin, you again follow Raz as he tries to re-assemble the fragmented mind of one of the Psychonauts legends and stop the imminent re-animation of Maligula, an ancient foe once fought by the legendary Psychonauts of old.

Related Article – The Best PS4 Indie Games You May Have Missed

For the sake of spoilers, I won’t say too much about the narrative of Psychonauts 2. Needless to say, the story is one of the game’s charms; it’s clever, well written and delightful all the way through. It perfectly fits the magical locations, rich characters and drives you through its many weird and wonderful stages.

You get to see more of the Psychonauts’ inner workings, such as meeting Raz’s family, and the sequel really throws light on the assets I wanted to see more of. If you enjoyed the tone and genetic makeup of the first game’s narrative, you will also cherish this one. 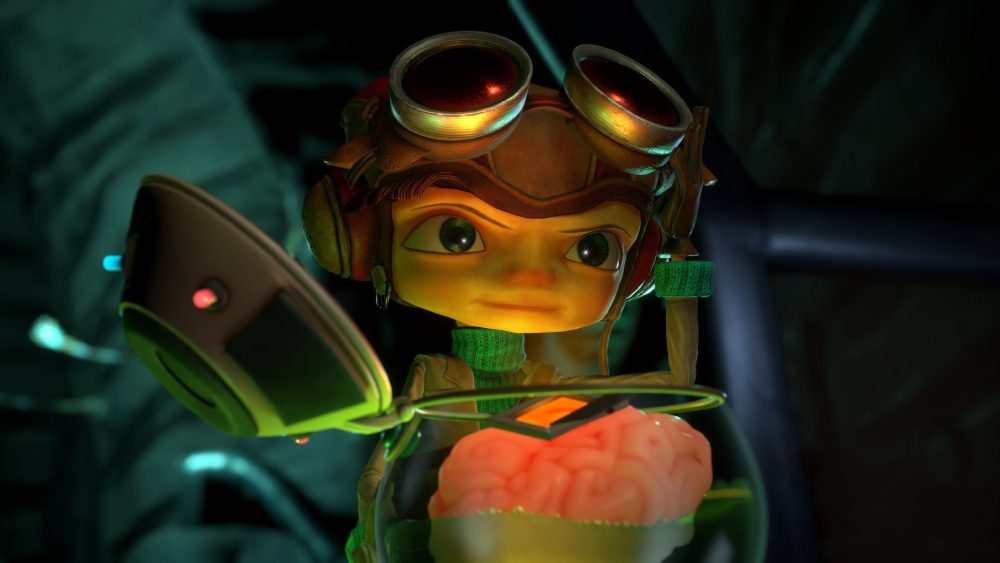 For Psychonauts newbies, you are in for a treat. Psychonauts is a 3D platformer heavy-laden with jokes, weird characters, and collectables aplenty. As I said above, especially in recent years, these games are too few and far between for my liking. Psychonauts has enjoyable exploration, great platforming and lists of collectables that are actually fun to track down and discover.

Pair that with a gorgeous art style and the traditional Double Fine banter and you have a massively pleasant package.

Strolling Through The Minds of Others

In between the platforming and collectable madness, as Raz, you have the power to enter people’s minds and, hopefully, fix what ails them. Another aspect I think Psychonauts does really well is how it tackles mental health and some of the issues the world faces today.

When you start the game up you get a splash screen detailing these issues and a link to where you can get help. Psychonauts tackles Addiction, PTSD, panic attacks, anxiety and an all manner of mental health issues and does it with class, humour and with a subtlety and care that the developers should be proud of.

When you travel into character’s minds you are treated to some of the most twisted, eerie and downright comical levels I have seen in a long time. Ranging from weird culinary-based TV shows to hospital gambling scenarios, every level I fell into made me smile but also think about how people with mental illness may be suffering in silence.

When you are in these minds you can fix mental baggage, eliminate bad feelings and track down the many, many figments which make up the game’s main set of collectables. I love how Psychonauts 2 tackles strong subjects in such an enjoyable manner – it’s actually quite profound. 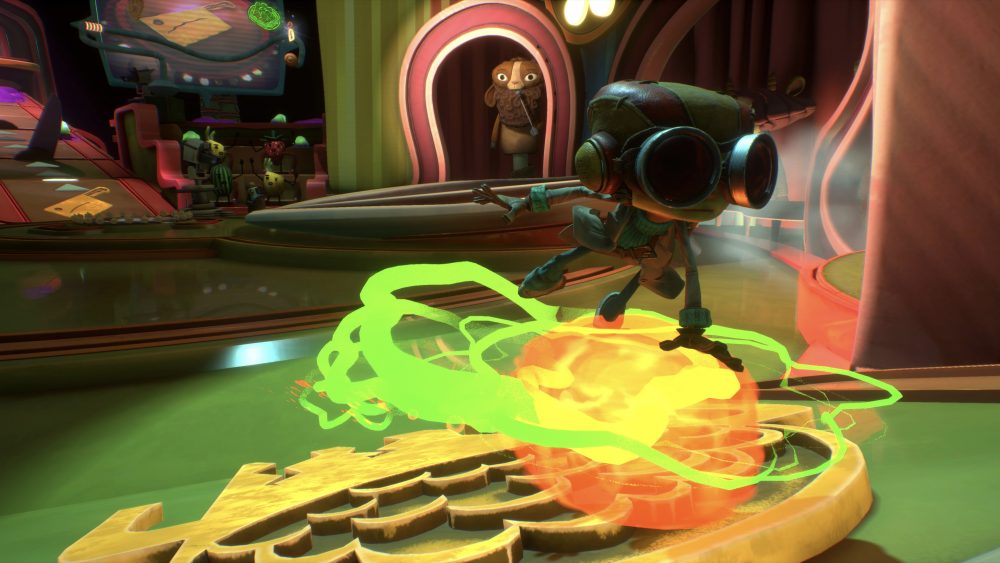 Raz is equipped with many psychic powers. These range from combat-based attacks to traversal techniques, and can all be upgraded and tweaked using a few in-game systems. This is one of the features that I thought was massively improved over the first game.

Overall, Psychonauts 2 has a much better progression system. As you level up you can upgrade your powers and purchase equipment, consumables and badges to tweak these powers in small, nuanced ways.

Full Of Style And Charm

From a presentation standpoint, I think Psychonauts 2 is beautiful. Don’t get me wrong, there is no PS5 version so I am only playing a PS4 game through backwards compatibility, but I love the Saturday morning cartoon feel to the environments and characters.

I love how the character models look like puppets and everyone you meet is so zany and weird. Psychonauts is by no means the best looking game I have ever seen but it more than makes up for it in style and charm.

The music is beautiful too, mysterious, wonderful and very apt, perfectly fitting the themes and style of the game and the whole package is perfectly balanced. The voice acting is also superb, nothing feels forced, out of place or grating in any way. In fact, the characters and their voiceovers are one of the game’s selling points, and coming from me that means something.

As typically someone who would place stories and characters towards the back of the queue when it comes to games, Psychonauts changed that, as I became to attached to everyone involved in the narrative. Indeed, it’s a testament to the writing and art design that they have created a world and setting I find so enthralling. 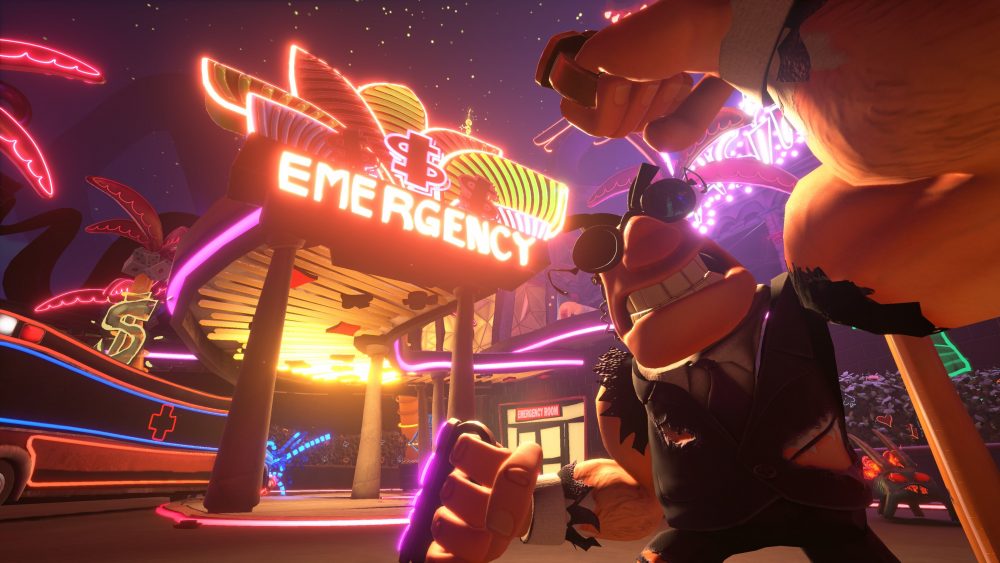 Performance-wise, I had no issues to speak of really. I did notice a tiny bit of texture pop-in here and there, which was unnoticeable in the grand scheme of things and everything else ran without a hitch.

However, I would love to see a PS5 version with DualSense support, 3D Audio and all bells and whistles we have been used to recently on Sony’s new home console. With Double Fine now part of Xbox Game Studios though, who knows if this’ll happen.

A Game For Fans and Newbies Alike

As you may have guessed, for me, Psychonauts 2 is a triumph. It manages to keep what I loved about the first title intact while adding things I really wanted to see and experience. It’s still hilarious, it’s incredibly well written and tackles some harsh subjects with care and humour. Honestly, go and buy it now and quit putting it off.

Psychonauts 2 is a cranial tale like no other and it pains me it may pass some people by.

Psychonauts 2 is available on PS4 now.

Review copy provided by the publisher.

Xbox Exclusives Spotlight: Spacelines from the Far Out