KEMCO JRPGs are my comfort food. When I’m between major game releases or seeking a break from more demanding titles, the Higashihiroshima-based publisher’s offerings are a perfect place to look. Ghost Sync is the latest release to fit that bill.

One look at the screen captures here will tell you what you’re in for stylistically: NES-style graphics, turn-based combat, character/party management, and plenty of adventure. It’s the same basic concept behind the vast majority of KEMCO titles, but they do it well, and Ghost Sync changes up just enough to make it worth consideration.

First of all, the hero is a woman. It continues to surprise me that so many JRPGs insist upon having male protagonists, but Ghost Sync gives us a very interesting and capable central figure in Lily.

She has been training to suppress savarians (evil spirits created by black aura), and quickly runs into a savarian that seems to be a young boy possessing the spirit of the dog. The boy, Bernard, can be seen and heard only by Lily, so the two immediately join up on their adventure. 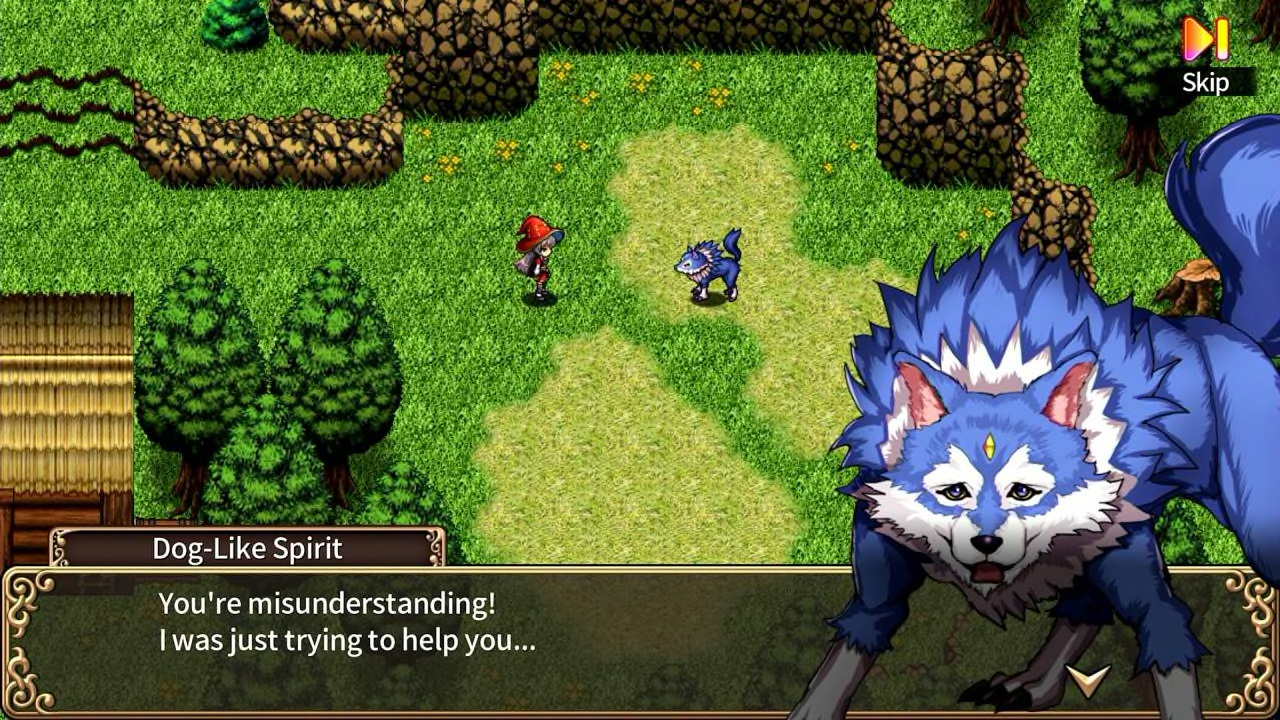 They’re quickly joined by a combat-focused woman, named Gwen, and a fairy-like spirit, named Lupy. It’s a female-centric group even after the party is completed, and they’re a fun team to utilize throughout the game’s entirety.

Of course, each member comes with specific attributes and abilities; you’ll be managing the standard balance of attack, healing, and buff/debuff skills. Bernard, however, provides a unique twist; he has the ability to possess enemies. This serves a double purpose of removing that monster from the enemy’s team and giving you its skills. Bernard stands a better chance of possessing an enemy after it has been worn down, creating an interesting battle dynamic. Is it better to focus your attacks on the enemy that’s doing the most damage to you or the one you can most easily pull over to your team? Which one will be most effective against the other enemies? It’s also a good defensive move. If Bernard is low on health, he can possess an enemy and let it bear the brunt of the attacks. If the possessed monster dies, Bernard and his dog return as they were.

The turn-based battles are fought on two three-by-three grids—one for your party and one for the enemy. 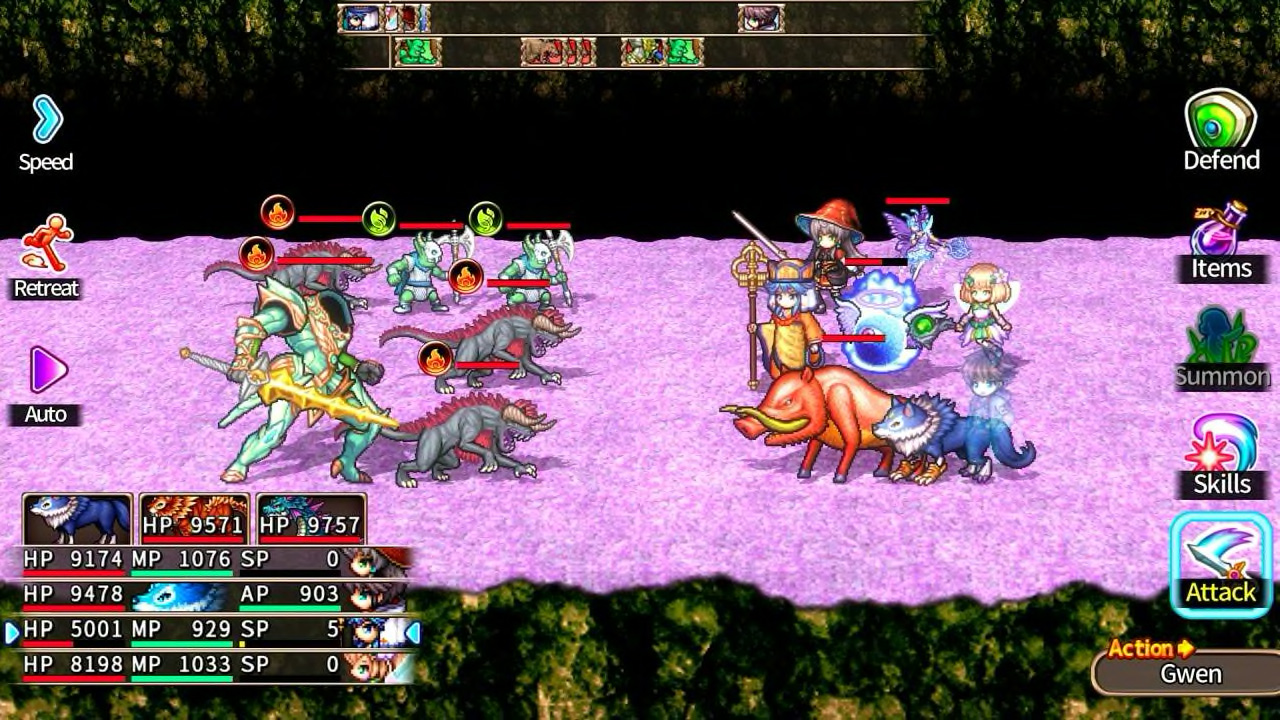 Positioning affects your characters’ attacks and defense, and you’ll use the enemy’s placement to your advantage. Certain attacks can target more than one square. For example, there are some that can pierce all three spots in a grid’s row, while others land an attack on both the targeted square and the next one up. Efficiency with these attacks is key to progressing through the game without having to grind, although there are ways around that, which I’ll get to in a bit.

All of the characters have skill trees to unlock as you progress, and it’s worth studying that up front. There are specific paths to traverse through the tree, and you don’t want to push down one path only to find the skill you really want is elsewhere. Granted, it’s hard to know what you want when you start, but anyone who’s traversed such a system before will have an idea of what works.

That said, you’ll notice I said skill trees—plural. Each type of magic gets its own tree, so there’s actually quite a bit to manage here. You can try to have all characters follow an even path, but I found it’s best to determine which character will specialize in what type of magic, for example, and max him/her out down that path.

Thankfully, there are a couple of ways to make sure you’re getting the experience you need. You can level grind, of course, but this isn’t too tedious thanks to a guild system that sends you on numerous missions for various rewards. Grinding is fine when you’re actually accomplishing something instead of just wandering in circles while waiting for the next random encounter.

Also, as has been the case with KEMCO games, in-app purchases can speed the process. $4.99 will get you a 200% experience multiplier you can turn on/off at will. It’s a fair price and a great way to pull your team up to the level required to beat a certain boss, and you can shut it off if you don’t want to become overpowered for standard game progression.

The visuals and music are similarly enjoyable. There’s nothing groundbreaking here on the retro-front, but the graphics are colorful, bright, and nicely detailed. They look fine when your Switch is docked, but the whole presentation is a natural fit for handheld mode. 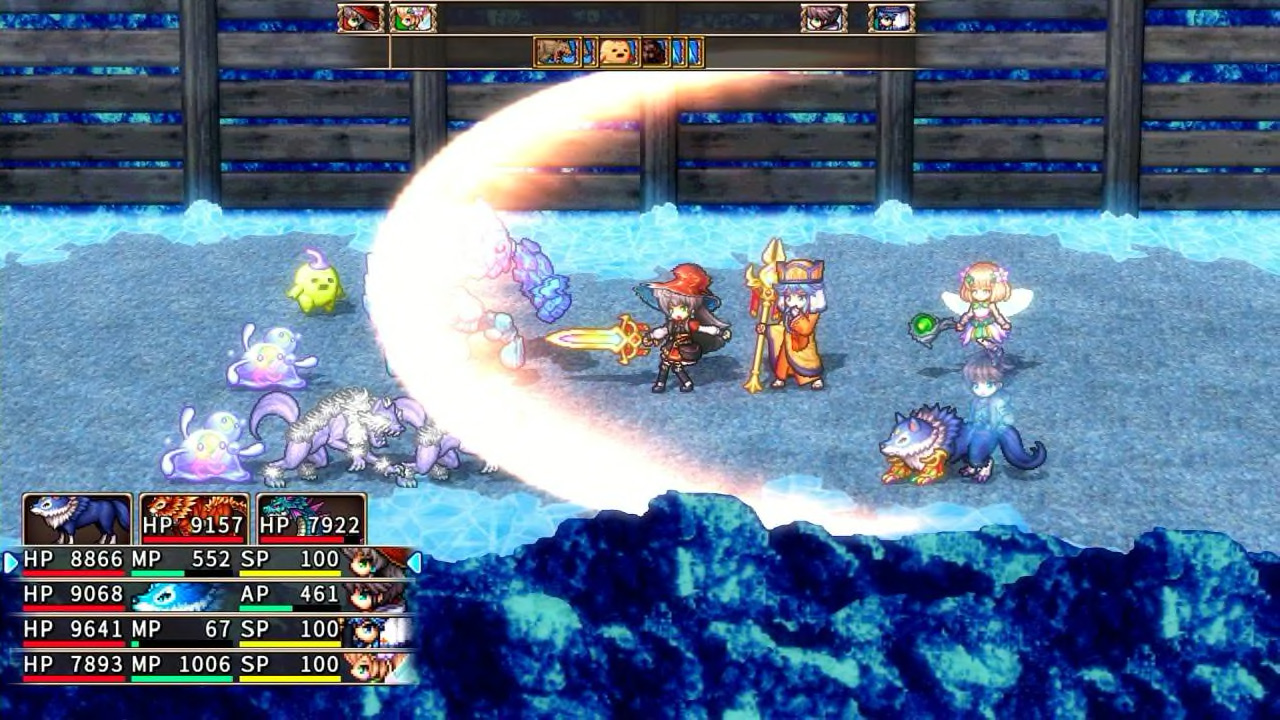 Finally, even without any DLC purchases, Ghost Sync is not terribly challenging. You may occasionally find your party is not ready for a specific area or boss battle, but there are plenty of enemies around to help you get there quickly.

This all boils down to a standard KEMCO release that has just enough unique battle and party management elements to make it worth the purchase. The story may not command your attention, but the attitude and tone should be enough to keep fans of retro JRPG entertained throughout the adventure.

Xbox Game Pass: eight of the best games to chill out with