Astroneer is one of those unique games where you very rarely ever feel stressed out. While it’s meant as a base building, resource gathering type of game, Astroneer never throws a challenge in your face. This leaves me feeling a bit mixed about my time with Astroneer. The calmness that you experience during the first few hours leads to an enjoyable start. However the more you progress, that same lack of challenge starts to become the game’s downfall.

Like I mentioned above, one of Astroneer’s strongest qualities is its stress-free gameplay. You land on an alien planet, and that’s about it. There isn’t an overwhelming sense of doom, a major threat, or even much of a reason to do anything. The game lets you build your bases however you want, wherever you want. This makes the opening hour or so both incredibly fun and, to a certain extent, slightly frustrating. It was awesome to experience the game at a slow, relaxed pace. Discovering various materials and worlds was something I did on my time. I was never in a mad rush to try to build something before some impending doom and gloom reached me. Astroneer falls into that very “just chill out and play” sort of game.

However, this also presented an issue fairly early on in my playthrough. While Astroneer doesn’t present you with any doom and gloom, it also doesn’t present you with any reason to do anything. When the game tells you to go and check out the strange sight or sound off in the distance, you can do so. The catch is that there isn’t any actual narrative reason why. So, I didn’t for the longest time. It was only after spending a number of hours building my base that I decided I should go check that out. Ultimately, what I found wasn’t entirely worth going after. That’s not to say the game makes you feel like you wasted your time. Rather, the game is so chill that it doesn’t necessarily present any reason to do any of the “objectives “it gives you. 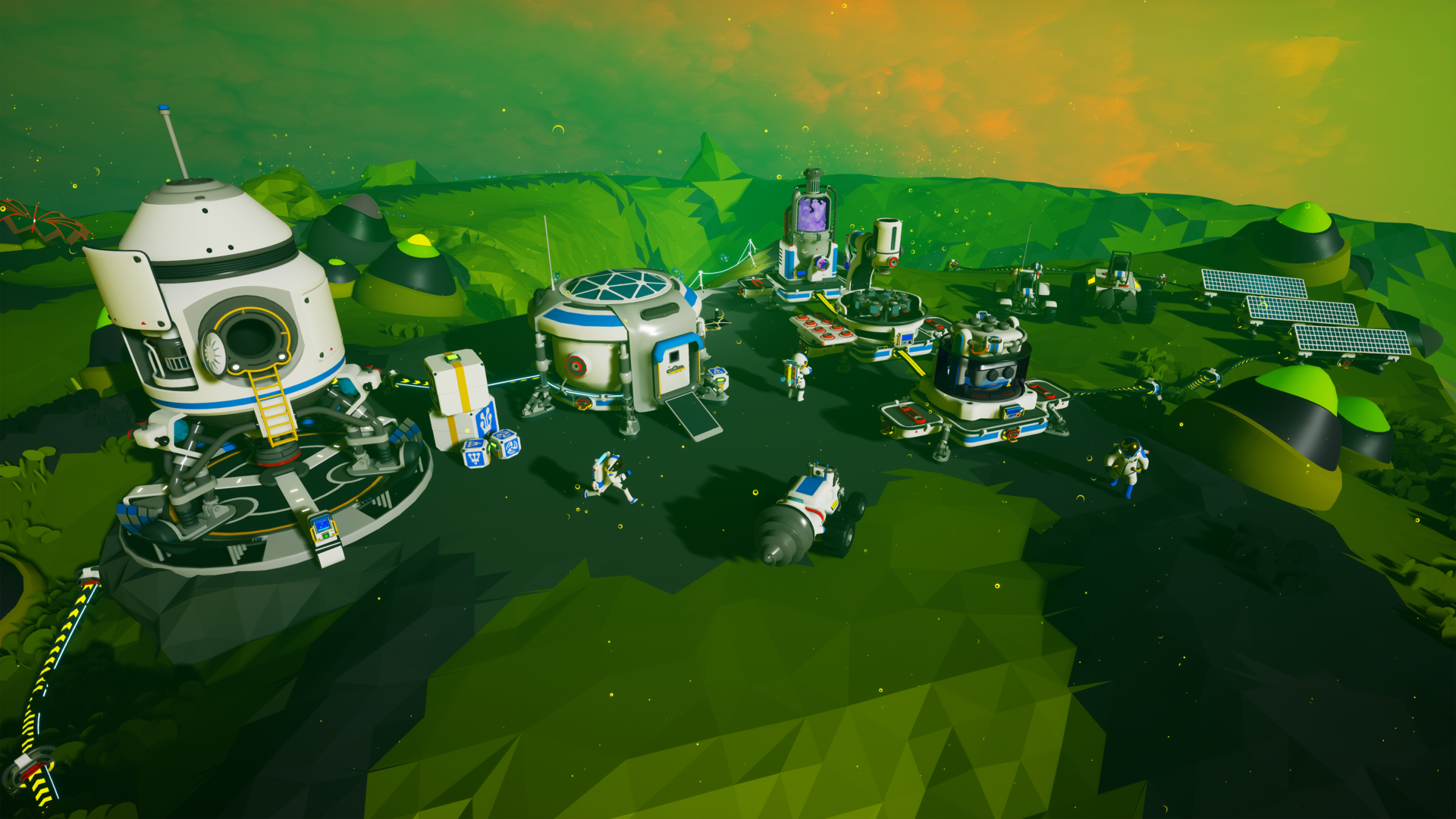 Astroneer does excel at presenting you alien worlds you can completely search and build in with friends. Having previously played this game on other platforms, I can tell you the best part of playing the game is when you and a friend decide to work together. It allows you to build some truly unique and awesome bases on these alien worlds. To a certain extent, having a friend also makes the task of gathering resources much easier, as you don’t have to worry about limited inventory space. Unfortunately, during my time on the Switch version of Astroneer, I wasn’t able to play with a friend. This meant that while the game still was very chill and fun, it lacked the true fun I previously had building a base with friends.

My only main issue with Astroneer has to do with its overall gameplay loop. The game presents seven different areas on which you can land and build bases. The issue is that there is, once again, no reason to go and explore all seven regions. Once you’ve landed on one or two, you’ve essentially seen all that the game has to offer. The exception being for maybe a few differences in a snow-covered planet versus a more lush garden world. This ultimately makes the game lose quite a bit of its fun after you’ve played it for a few hours. Sure, I can land on that other planet and go ahead and start building bases again, but why? There’s no advantage or disadvantage to doing it, nor is there a narrative reason to continue forward. Ultimately, it’s the chill and relaxed gameplay style that makes the game run out of steam after you’ve put in quite a bit of time. 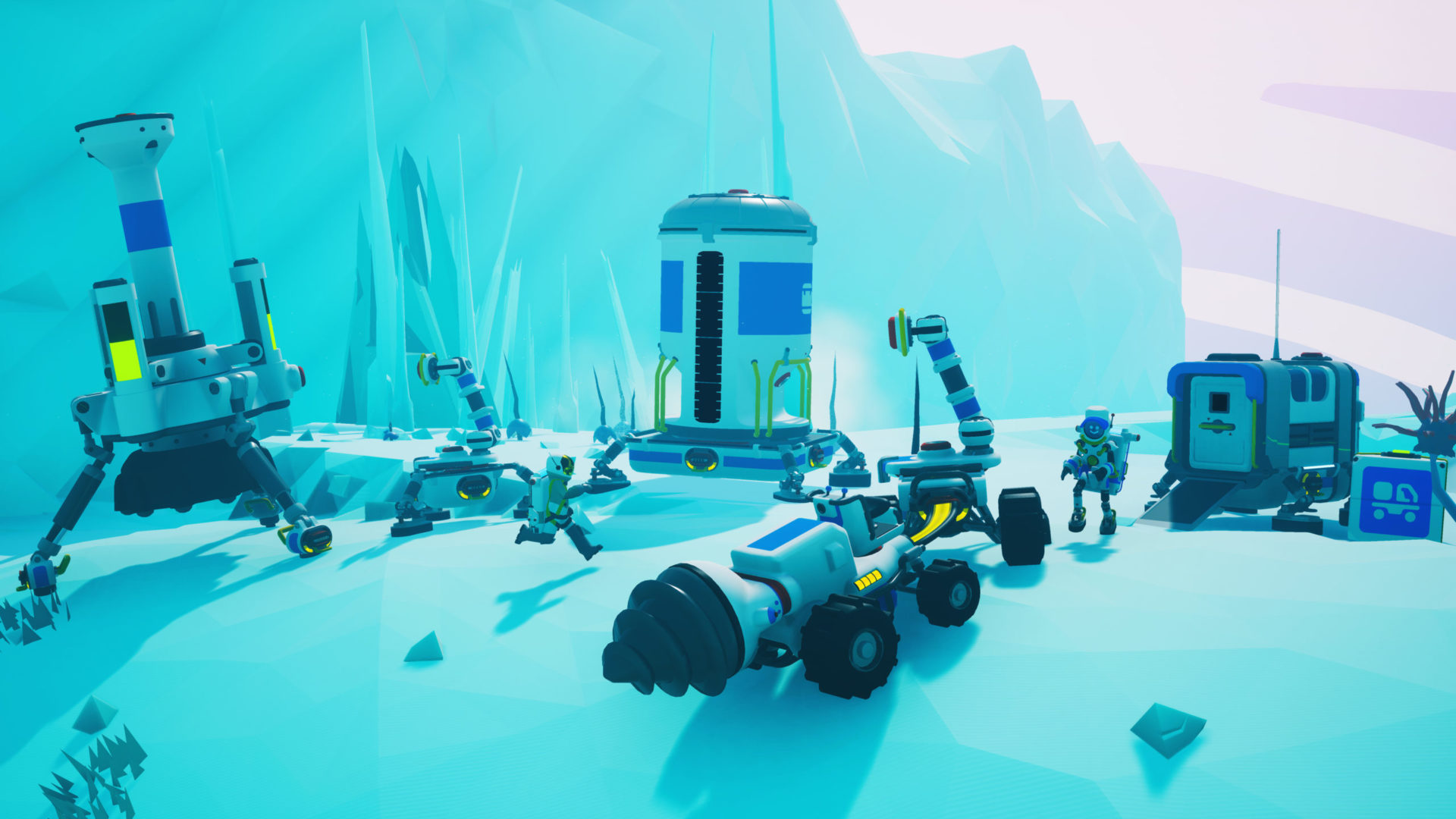 Overall, the game’s performance on Switch is quite good. I was initially interested in Astroneer when it was first announced as coming to Nintendo Switch, knowing the game previously on other platforms had some performance issues. The game’s unique art style works well on Switch and you don’t notice any major differences between the Switch version and other platforms (except for maybe PC). I also didn’t run into any major noticeable frame rate issues that can sometimes plague city building/base building games on the platform. Overall, it was a strong showing on the games performance.

My time with Astroneer was a pleasant experience that let me enjoy a more chilled out base building game. It lets you explore these worlds and discover everything it has to offer without ever holding your hand, nor providing challenges to make you feel stressed. The game on Switch ultimately looks and runs quite well; in many ways, the Switch may be your preferred place to play. Playing by yourself is a perfectly decent way of experiencing Astroneer, yet the game is truly at its best when you can play with a friend. That said, I will once again say that the chill gameplay style ultimately is the game’s long-term demise. After your first 10 to 15 hours, there’s no real reason to continue on to other worlds. Besides the setting changes, there’s nothing that new or challenging about going to other worlds.