Set in a vibrant fantasy world, Headland sets you on a mission to keep a cute and colourful land safe from a villain that threatens imagination itself. Headland exists in a dream and you play as Nor, the only one who can rescue the adorable inhabitants.

You are plunged into the action immediately. Upon your arrival in Headland, you see a group of mischievous acorns bothering your robot friend. After defeating them, your friend is further harassed by the main villain of the piece, who steals his Imagination Core and splits it into shards. From then, your task is to explore all of Headland in search of the shards to repair the Imagination Core and restore Headland to its fun, peaceful state.

You establish a base on a raft floating through the air populated by a number of robots. From here, you can upgrade your weapons, trade in your experience for more health or power and hone your skills in battle platforms behind unlockable doors. You can also access the world map, which in turn gives you access to the various levels where you’ll rescue villagers, gain experience and find the shards of the Imagination Core.

Headland has simple enough mechanics. You have buttons to attack, dodge and block. Progressively more difficult enemies appear and you smash your way through them until your path is clear. As well as experience, you collect materials that you use to upgrade your weapons and the raft. Combat isn’t complicated, but if you aren’t careful with your health and power, it can still be challenging.

The dream setting is woven into the gameplay really nicely. It justifies the silliness of the world populated by robots and giant frogs and cheeky acorns. When you are defeated, you are prompted to reimagine the adventure again, which I think is cute.

Most of the enemies you’ll encounter in Headland are nefarious but adorable creatures that exist in the wild, but your main foes are the Pale Guards. These greyscale, marching soldiers will spear you if they see you and are the key threat to the joy and playfulness of the Headland. 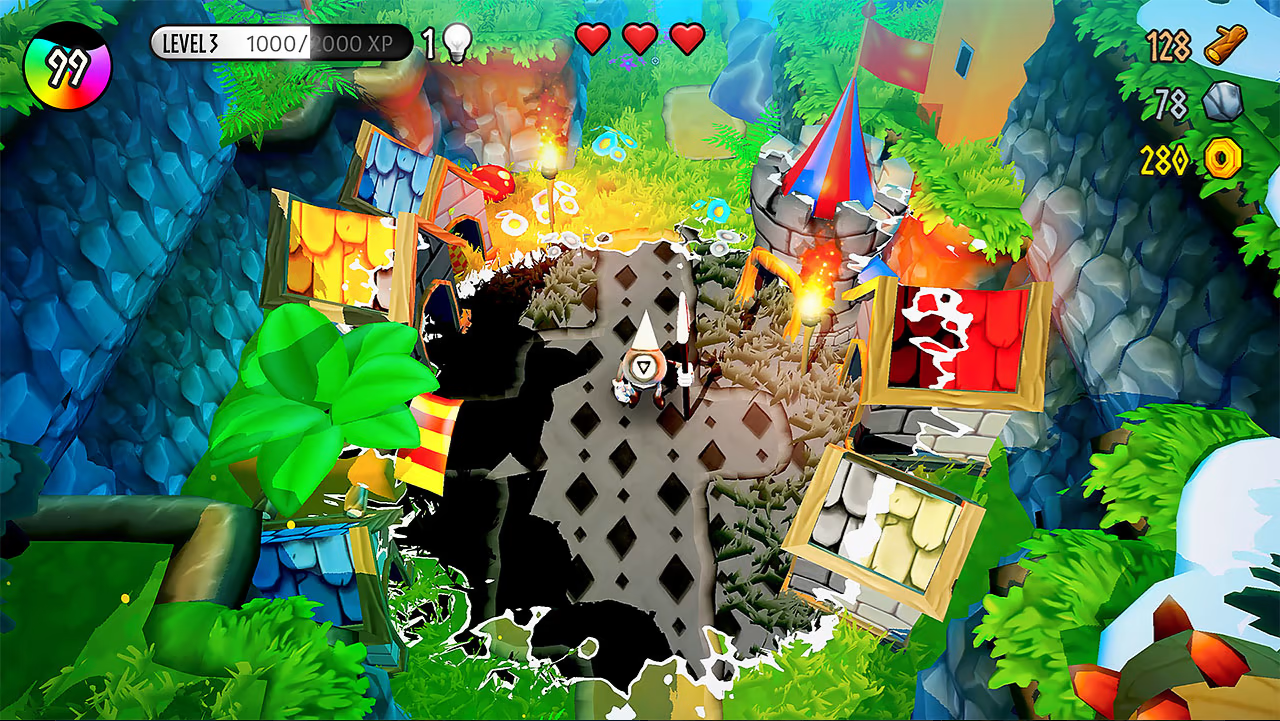 Your battle with them escalates to a boss fight that requires a surprising amount of strategy and features a genuinely creepy villain. For an angry grey sausage, its staring eye and cracked, shadowy mouth leave quite an impression. This builds to a finale that offers a very sweet message about retaining your creativity beyond childhood.

Overall, Headland doesn’t have a huge amount of complexity to it. The mission, controls, gameplay and message are all relatively straightforward. But they’re all fairly well constructed, and the simplicity of the game lends itself to its E rating. It’s definitely accessible to young audiences, with bright colours and a wholesome lesson.