Sam & Max: Beyond Time and Space is the follow-up to Sam & Max Save the World. It’s a quality release in many ways that will hold some appeal to fans of graphic adventure games. That said, if you could only pick one game, I’d recommend the former title.

As a bundle of five episodes loosely tied together (one less than the previous game), Beyond Time and Space is only as good as its storytelling. The first episode gives you a taste of what to expect. You have to travel through time to stop the “hairy, bloated, pagan god – Santa Claus!” from sending a giant robot that will destroy your neighborhood. It’s funny, but not as a result of the overall plot. Instead, it’s the titular duo that elevates the cliched writing.

Sam & Max are something of a parody and an effective one. This buddy comedy duo will resonate with you even more if you remember the original LucasArts classic, Sam & Max Hit the Road, from 1993. That game had the unfortunate distinction of following two of the best point-and-click titles ever made (Indiana Jones and the Fate of Atlantis and Day of the Tentacle). But I digress.

This canine/rabbit pair had me chuckling aloud more than I expected. Being a 2007 release initially, some of the jokes, while still charming in their own way, are noticeably dated. But there’s still much humor in store. Non-essential items can be considered essential if only to hear the jokes attached to them. The voice work is awesome, not to mention the HD coat of paint. 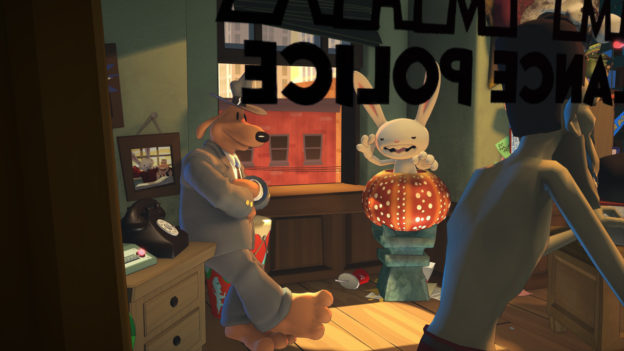 But even with well-made vocals, I found my interest waning when the jokes were more reflective of the story rather than character interactions. Vampires, zombies, and other supernatural MacGuffins didn’t do it for me. I feel they detract from the time-traveling element and make much of the humor feel crude and forced. In the end, I echo Kirk’s comments from his review of Save the World: “With everything available at once, the game’s charm tends to wear off after a bit. As such, I still found it best to put some distance between each chapter.”

At least this is an accessible release, even for those unfamiliar with the genre. Hints are available (rarely to frequently depending on your choice), and usually involve Max saying something that ultimately points you in the right direction. Mini-games are optional, a choice all titles in this genre should offer. Subtitles, traditional or touchscreen controls, and multiple save slots round out the quality offerings. 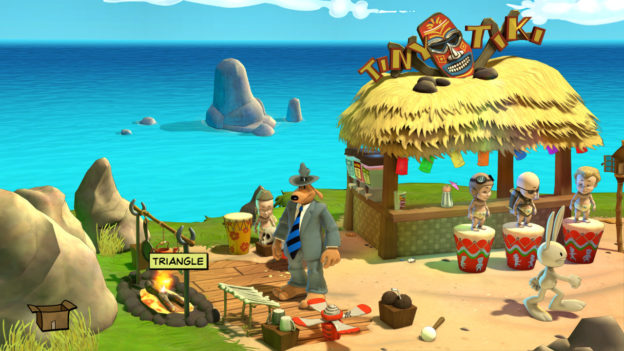 But I’d still recommend Telltale’s earlier title over this follow-up. I think it landed some of the jokes and puzzles better. And its humor is more self-contained, introducing characters rather than presuming you already are familiar with them. With more episodes that have superior, more consistent writing overall, Save the World is what I’d pick…at least until the original finds its way over to the Switch. I can dream.

Sam & Max: Beyond Time and Space is an OK release overall. This 20-or-so-hour adventure has an admirable quantity of content, but the quality amongst the individual episodes is inconsistent. I found only two of the five to be the sort I’d want to replay. Still, Sam & Max are great characters. Pick up their earlier adventure, Sam & Max Save the World, to get an idea if this one is for you.