Final Vendetta PS5 review. From less highlighted fare such as Raging Justice and Mother Russia Bleeds all the way through marquee offerings such as the magnificent Streets of Rage 4 and the hugely inventive River City Girls, it’s certainly fair to say that the side-scrolling brawler genre is undergoing something of a renaissance in recent years. That comeback for the side-scrolling brawler genre continues unabated in 2022, with the latest offering, Final Vendetta, proving to be an impressive love letter to those coin-gobbling classics of old, albeit one that fails to really elevate the genre beyond its well-established design bedrock.

Final Vendetta begins (and ends) pretty much exactly as you’ve likely already guessed. Set in a particularly grungy depiction of modern London, the “Syndic8” gang have stolen the sister of double tough lady Claire Sparks. Together with her two best friends, retired pro-wrestler Miller T. Williams and the incredibly named bare-knuckle fighter Duke Sancho, the trio must smash skulls across the city as they attempt to free Claire’s sister from the shadowy group. Look, I know that most people rightly don’t give a fig about the plots in these games for the most part but Final Vendetta’s story is pretty much a copy and paste of just about every other side-scrolling brawler story there has ever been. 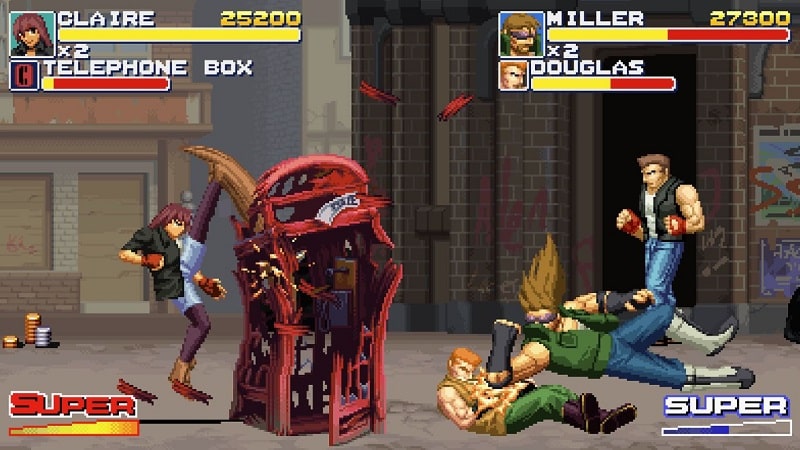 Once into the game itself, Final Vendetta continues its happy stroll down Formulaic Avenue as you brawl your way through the obligatory opening street level, before heading into the wholly expected subway level and so on and so forth. There’s even a bonus stage where you have to smash up a lonely car for extra score that feels like it was ripped kicking and screaming straight from Street Fighter II’s face smacking interludes.

Thankfully when it comes to the actual meat and bone of Final Vendetta’s goon mashing gameplay, developer Bitmap Bureau has made some subtle tweaks to the established formula to keep things interesting. The first and arguably most impactful of these is a handy block mechanic that let’s you, well, block incoming strikes. Now sure, this might not seem like a big deal but the beating heart of the traditional side-scrolling brawler has largely revolved around your ability to evade and crowd control effectively. In Final Vendetta however, not only are you expected to do that still, but now you have the option to block (some) direct attacks which in turn provide you with an additional tactical approach that can literally save you when the screen begins to fill with bad dudes.

Another neat wrinkle that Bitmap Bureau has introduced in Final Vendetta revolves around how special attacks are handled. The original crowd control mechanic to get you out of a sticky situation, executing a special attack in a side scrolling brawler usually results in you losing a small chunk of your health to compensate for the damage you’ve just inflicted to everyone around you – and in that sense Final Vendetta makes no great correction. However, what Final Vendetta does do is introduce a ‘special’ meter which when quickly filled by putting fist/foot/head to face, allows you to pull off said special attack with enduring a health penalty. The upshot is that this meter ends up being yet one more element of your tactical arsenal – providing the means for you to extract yourself from a grim situation without suffering any damage. 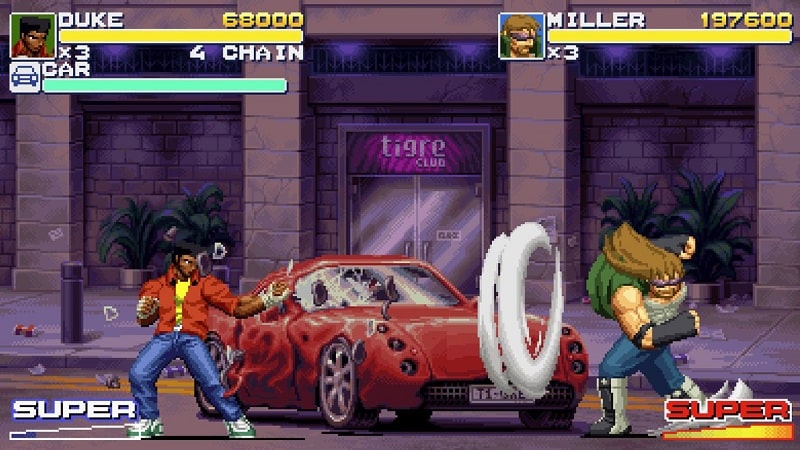 One other strand of the side-scrolling brawler DNA that Final Vendetta productively fiddles with are the enemies. Aside from being animated beautifully for the most part and generally falling into the similar baddie archetypes that you would expect (skinny dude with a jacket, fat dude that charges across the screen, quick dude with knives, lady with a whip and so on), many of the punchy malcontents in Final Vendetta have a rather sneaky trick up their digital sleeves. When floored, but not killed, many enemies in the later levels have a rising attack which can catch you unawares at best and finish off you off entirely at worst. In essence, it forces players to be a lot more aware of the combat environment and stands as one way, if subtle, that Final Vendetta attempts to stand apart from its genre stablemates.

Away from its modest improvements to the formula, when taken on its own merits, Final Vendetta is a highly enjoyable side-scrolling brawler. Combat feels suitably crunchy, with all manner of kicks, punches, throws, combos, backbreakers, suplexes and more all landing with the appropriately keenly felt thud, while the level of difficulty is pitched just right with a gradually steepening trajectory as you reach the end of the game that is reflected in more challenging enemies, traps, boss encounters and more besides.

Audiovisually speaking, Final Vendetta certainly punches above its weight for the most part. Though the character animations are not short of flair with excellent design work throughout that appropriately adheres to Final Vendetta’s classic influences, the backgrounds don’t fair quite so well. Often lacking in detail and appearing distractedly pixelated, the somewhat basic backgrounds of Final Vendetta do little to tempt the senses and ultimately end up doing a disservice to its real world setting. Certainly, seeing London’s famous Tower Bridge and the cityscape that lay beyond represented as a muddy mess of chunky pixels with little or no animation and definition is more than a touch disappointing. 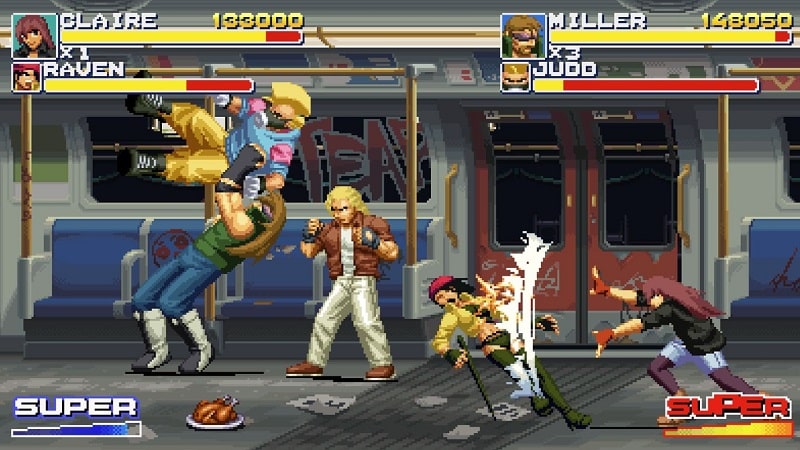 When it comes to the music and sound effect side of the equation though, Final Vendetta excels with palpably bone-breaking sound effects and a relentlessly energetic soundtrack that simultaneously recalls the lively, bop-worthy soundtracks of games like Streets of Rage and Street Fighter III with loving remembrance. All in all, Final Vendetta is treat for the eyes and ears.

Something that’s less of a issue with Final Vendetta itself and perhaps more endemic with the approach towards reinvigorating this genre at large, is the fact that many contemporary side-scrolling brawlers seem to be content in performing what is essentially some flattering mimicry of those halcyon genre legends, rather than electing to push the envelope and meaningfully evolve the concept. Though its subtle improvements are welcome, Final Vendetta does ultimately fall into this category nonetheless.

Despite its small steps toward evolution and innovation, Final Vendetta feels like a wistfully romantic and well executed, if ultimately conservative take on those side-scrolling brawlers that held our attentions (and quarters) so rigidly in years gone by. Despite the fact that Final Vendetta doesn’t push the genre forward with any sort of strident vigour, it’s certainly true that it’s still a lot of fun all the same and that enjoyment is only amplified when played with another friend locally.