Developed by Ubisoft Montreal, Rainbow Six Extraction is firmly rooted in the series’ cooperative strengths, encouraging teamwork and communication. So much that you quickly discover the immense gap between a solo or team experience.

Suffice to say, this is one game you don’t want to dive into solo.

You’re Here To Shoot Stuff, Got It? 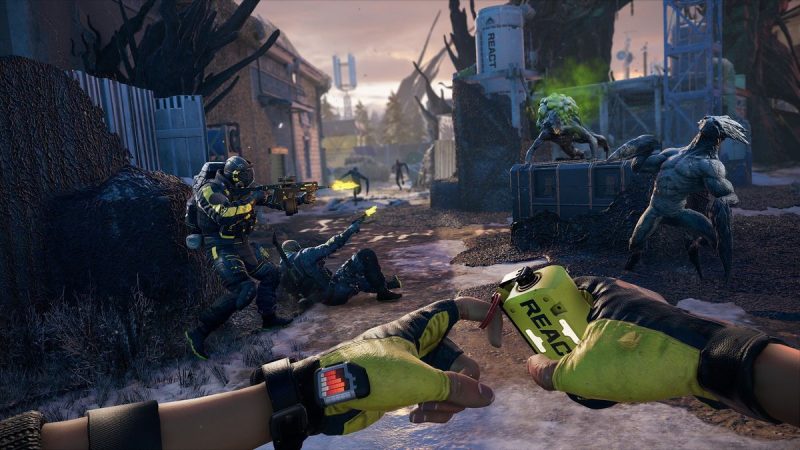 From the start, booting up the game will give you the option of a tutorial mode. While this can be skipped, it’s highly recommended for players to give this a go, as even if you’re familiar with previous Rainbow Six games there’s plenty of new additions here.

The backstory is simple, revolving around a virus outbreak that resulted in an outbreak of creatures known as Archaeans.

There are different types of these enemies to encounter, ranging from standard Grunts to the more advanced Tormentors. They all have one thing in common, namely spawning from nests around the map, something which the tutorial will acquaint you with.

If you’re expecting any real story with depth, then you should probably taper those expectations. Rainbow Six Extraction lacks any story other than enemies-are-bad-must-shoot-them-for-experience.

The brief narrative elements that exist feature some beautiful cutscenes that offer context as to why you’re in a new location. Still, this isn’t the sort of title most people would purchase for a story; it’s obviously trying to attract the attention of the Rainbow Six Siege crowd, which was another title that started off pretty poorly but is now an incredible game that fans enjoy. 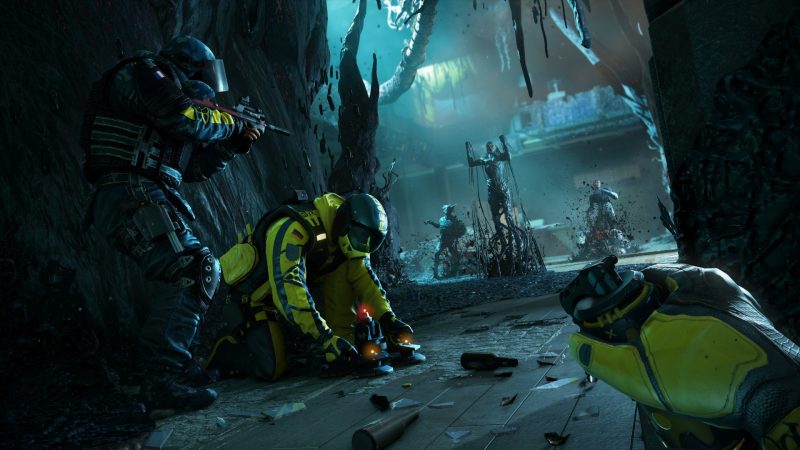 Once you start the game proper, you’re given several different Operators to play with. There’s nine in total, and I would strongly recommend not to attempt missions solo, at least not until a patch arrives.

I had some time to play before the matchmaking went live, and though it could be down to my own lack of skill, it felt like overwhelming odds even though there’s a dedicated solo mode and missions.

Maybe with some levelling this won’t feel too bad, but if you do a solo mission and the game puts you in an elite encounter or even one of the nest encounters, it’s pretty tough, especially if the map puts the enemy or objective in an area that is very open.

I remember one elite mission, after stealth killing the three targets to spawn the elite, I went outside the room where the last target died. That spawned the elite in the corridor next to me, which killed me in about four hits and failed the mission. It was frustrating, to say the least.

Leaving No One Behind 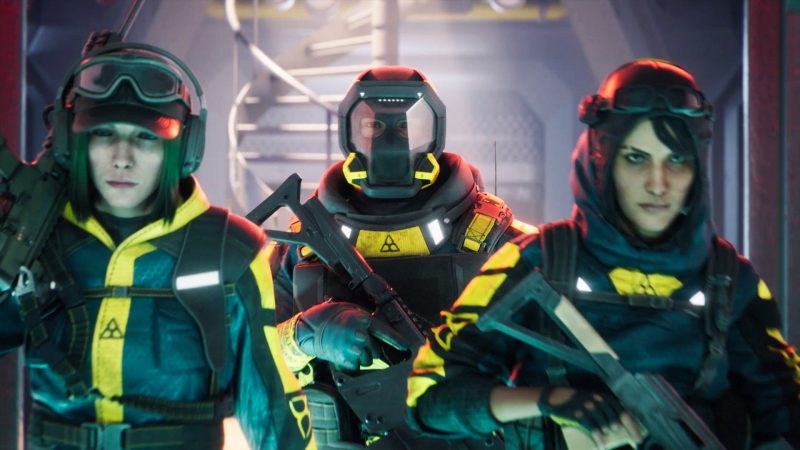 That specific encounter was frusturating, but that was exasperated by part of the game’s design. When an operator is killed in the field, away from an extraction point, they are classified as MIA.

This means that you’ll need to come back to that same zone by starting a new mission to extract the operator you’ve lost. Recovering them is slightly more involved though than just having to run up and push square to yank them out.

You’ll need to watch for enemies running at you, and look for certain nodes providing energy to the parasitic cocoon to destroy, so you can pull them out in the first place. If you fail at retrieving them, that operator will in fact lose XP, which could result in losing a full level and access to previously unlocked skills.

With this in mind, for the sake of new players coming in solo I would remove the MIA mechanic for the first couple of levels, just so that you can get a feel on the combat and the mission structure.

Albeit frustrating, the MIA mechanic does add some urgency and purpose to missions. Losing a character means more grinding to keep your preferred operators properly levelled. It still manages to be annoying, even knowing the health decrease that operator would take would make them unusable for your next few missions anyway.

This also makes the use of other operators, besides your preferred few, imperative to your success. Returning to base as you do post missions lets you check in on your operators health percentage, and managing who to take with you and when relies on you making sure the operators you need are able to fight.

The health of your operators though brings up another sticky point in the gameplay, which is that the med kits you find in the field only provide temporary boosts. You regular health cannot increase, and it made me feel like a system in which each med kit instead provided you with a set amount of permanent health that can cap out, at which point any more you pick up would be extra. 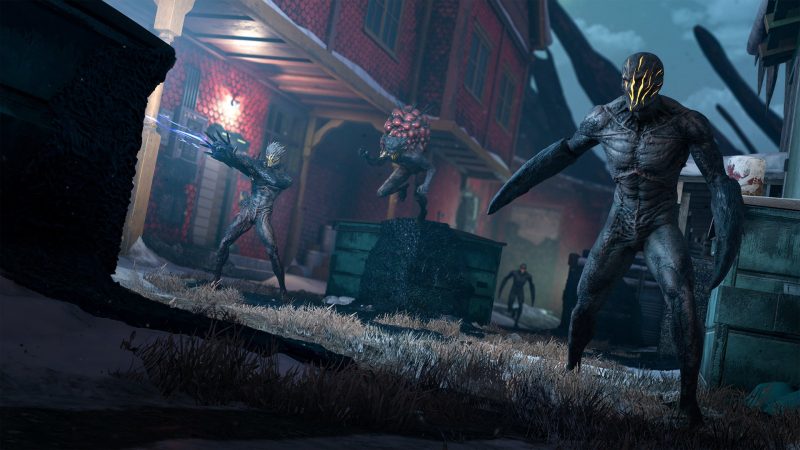 There are three different objectives in each stage. Taking out nests, extracting operators, and killing targets. Once you complete your first objective, you have the choice to keep going, or to extract yourself out of there.

It’s choices like this that exemplify why playing with friends is the absolute best approach to Extraction. Considering the health of your operators means that sometimes it’s better to extract early rather than continue on, and non-communicative teammate foolishly pushing forward resulting in you failing the mission is a scenario many of us are only too familiar with.

Thankfully I happened upon YouTuber TheJan also playing, and in the levels we played together I felt just how much of a difference it makes to have your squad mates communicating.

You won’t be able to rely on that kind of luck all the time though, to encounter a random squad who both have microphones, and are communicating. Definitely make the effort to grab a few pals for this. 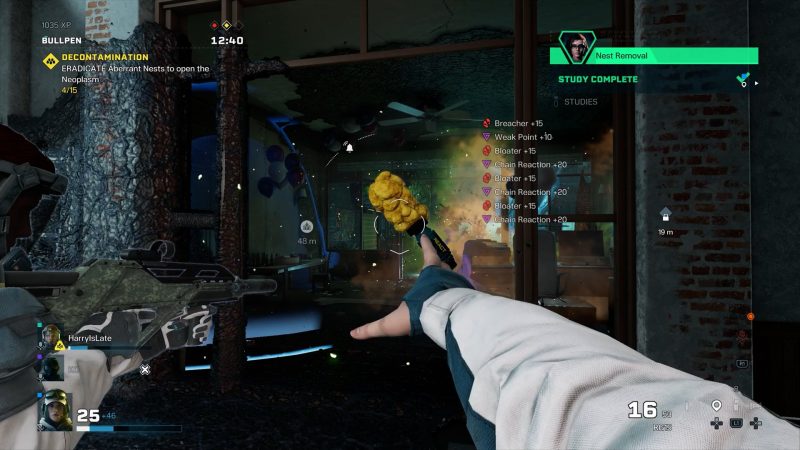 As you rank up, you gain tech points which allow you to invest into different skills that can be unlocked. XP can be gained by doing different small quests inside the area from targeting enemies or stealth killing different enemy types.

These quests do get quite hard later on and without a squad mate helping you out, they can seem almost impossible and just not worth the trouble. You can get lucky, but it’s otherwise an unfortunate difficulty spike that makes your levelling grind more tiresome.

My biggest gripe with this system is that you need to unlock each tier before the next tier unlocks. So if you wanted to pick certain equipment first then go back and unlock the other ones later once you have the equipment you wanted, you can’t do this.

I guess this is okay? But to make it makes the whole choice thing pointless as you’re gonna have to pick everything anyway to progress, might as well just give you all the points for each equipment tier then go to the next one, it does basically the same thing.

Best Enjoyed With Others 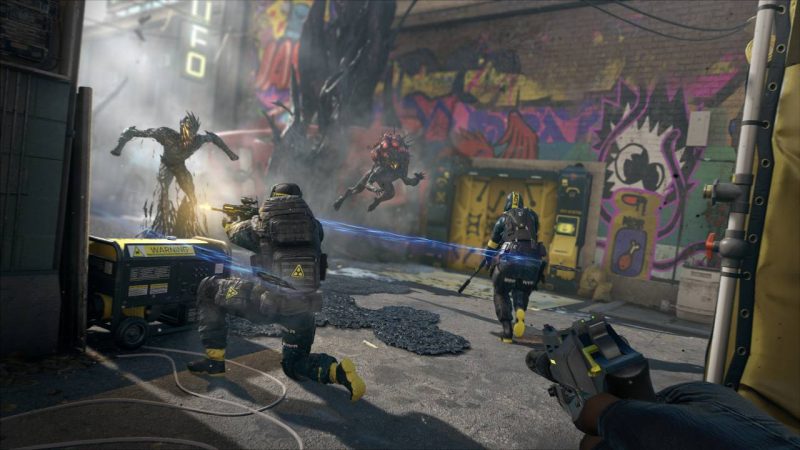 Overall I found that Rainbow Six Extraction had some interesting mechanics and a gameplay loop that was admittedly fun, but it falls apart when you’re not playing in a team.

Although it can add purpose and weight to your missions, aspects like the MIA mechanic end up just being more annoying than anything. It just felt limiting, and more like a nuisance – similar to how the sludge that is practically part of the environment will deal damage to you, just by walking and standing in it. At least the MIA mechanic is avoidable in that you can turn it off.

If you enjoy squad based games this could be an interesting title to pick up as its a budget price, plus you can give 2 passes to friends to also give it a try, because frankly it’s only really fun with friends. I have been really harsh on this game, but I did enjoy my time with it and will continue to play it occasionally, and hopefully with TheJan again.

However it’s nowhere close to perfect, and when you’re by yourself – it’s really just okay. Like any good wine, Rainbow Six Extraction is best enjoyed with others.

Rainbow Six Extraction is now available on PS5 and PS4.