This War Of Mine: The Final Cut Review (PS5) – A Peerless, Harrowing Anti-War Survival Odyssey That Everybody Should Play

This War Of Mine: The Final Cut PS5 Review

A Timely, Stunningly Grim Survival Effort That Substantially Improves Upon The Original

For the uninitiated, This War of Mine is a staunchly anti-war survival experience that flips the typical videogame script. Here, rather than dealing death with reckless abandon from the end of firearm without care in the world other than miraculously regenerating health and an ever growing kill count, players instead must control a survivor or a group of them, struggling for survival in amongst the ruins of the destroyed city they once called home as they grapple with food, illness and hopelessness. 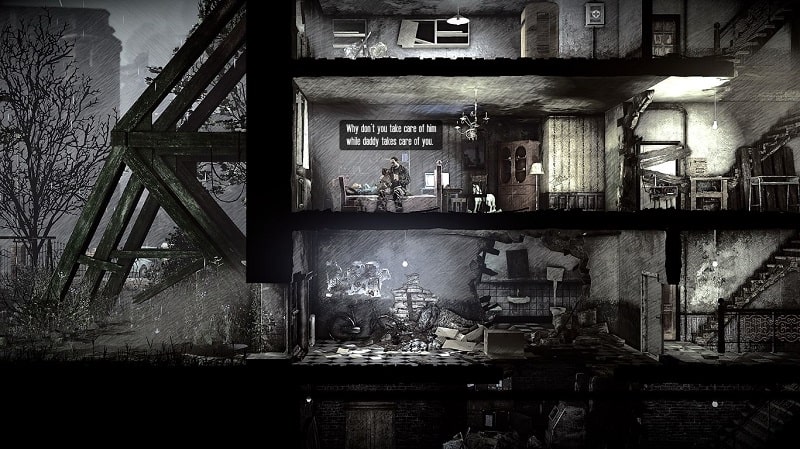 This is no three-dimensional game of Whack-A-Mole with an increasingly devastating set of shooty things; This War of Mine instead drags the player across a floor littered with jagged glass as it seeks to widen your concerns and disabuse you of the notion that violence is the be-all and end-all of war, when in reality, there is always a human cost that must be paid and that tragedy often begets more of the same.

Viewed from a side-on, two dimensional perspective, This War of Mine certainly ticks many of the genre bingo boxes that one would expect from an offering in the survival genre. Players must ensure that they do not die of hunger, cold or illness while also warding off potentially debilitating mental conditions such as depression, substance addiction and psychosis. So far, so expected, right? Unlike many of its survival genre stablemates however, the endgame in This War of Mine is not to start from zero, accumulate near infinite resources, create a home and then gain a level of dominion over a landmass, but rather to reverse that entire scenario – tasking the player to make do with terribly finite resources and with the ultimate goal of fleeing the decaying ruins of their home in order to escape the brutality of the war that surrounds them.

There’s a whole heap of strategy and planning that needs to go into all of this too. Not only do you have to scavenge materials and supplies in the home that you start off in (which dynamically changes in each playthrough thanks to the use of procedural generation), but you also have to venture beyond your initial homestead to other locations in order to scavenge loot, all the while attempting to avoid other opportunist survivors and the tightening, jackbooted grip of the local military presence. 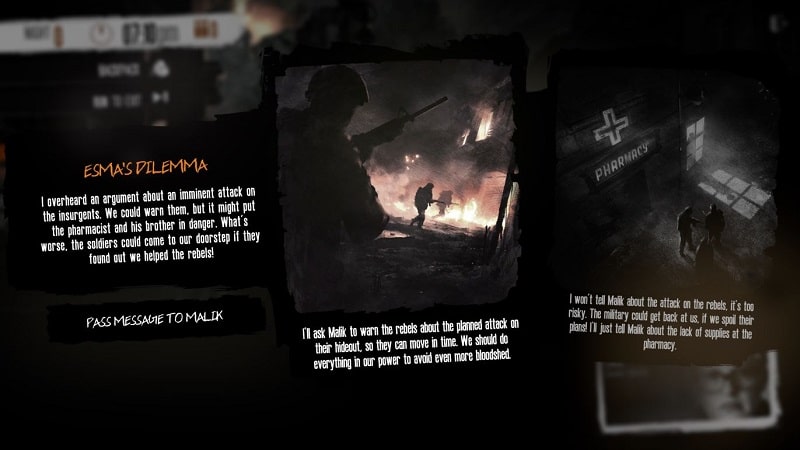 Like everything else in This War of Mine however, there are layers to this. Venturing out to fetch crafting supplies and much needed food and medicine is all well and good, but if you’re the only survivor in your home, venturing out leaves your humble, crumbling abode undefended and potentially susceptible to robbery. Meanwhile, if you do have fellow lodgers sharing your house, a great deal of thought must also be given to who must be awake guarding the place, who needs to sleep and the resources and tools you need to take with you and so on and so forth.

There’s a substantial amount of creative latitude in regards to just how you can survive too. While eating tinned food and stale vegetables will help to stem your appetite to an extent, cooking hearty meals provides a far better solution to your hunger – but consumes precious materials to provide the heating and other key components for that process. Elsewhere, a more long-term solution to your food problems would be to grow your own by scavenging the necessary materials and fertilizer that you’d need to do so, but again, this also brings with it the need to cultivate the infrastructure to achieve this; something that is extremely difficult to do in a resource-starved, ruinous hellhole where death and total resource poverty lurk around every corner.

However, much like the very real and very current conflict in Eastern Europe that This War of Mine echoes, the question of effective resource gathering and survival is just one side of a tragic and bitter coin. While such material concerns are key to your survival, so too are the moral decisions that you must make. Do you rob the house of a disabled old man to provide for the ill and dying members of your own homestead, or, do you choose to trade with other survivors and make do on the scant resources you may or may not have? Equally, do you venture deeper into a territory occupied by soldiers to obtain a teddy bear to calm down your child, or, do you leave them to their own devices as you prioritise fortifying your home – resulting in an increasingly traumatised child that in turn will eventually affect your own mental state. 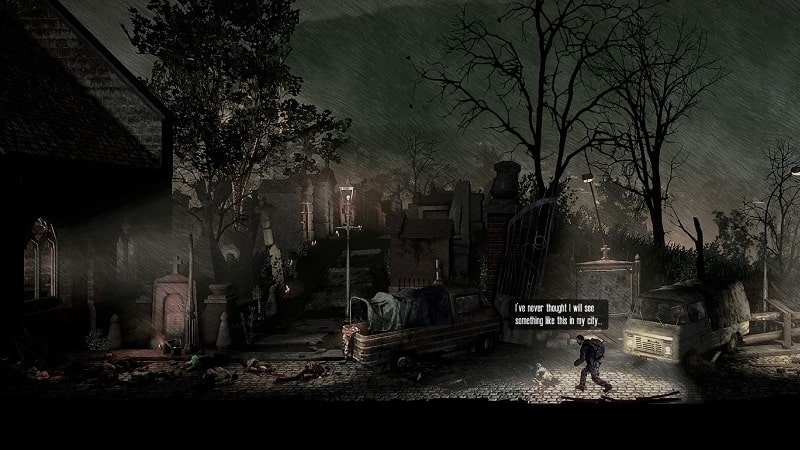 This is clearly where the genius of This War of Mine lay – with its dynamic emergent narrative making the player think about the act of surviving a war as more than just a series of maxing out resource counters, but instead as one continuous stream of constantly shifting moral challenges, where the stakes and consequences sharply increase with each consecutive heart-tugging conundrum. Certainly while developer 11 bit studios would go on to explore this concept on a larger, more macro level in its more recent post-apocalyptic city builder Frostpunk, that game never quite had the same intimacy as This War of Mine, with the latter focusing on a small group of survivors rather than frigid, doomed and sprawling cityscapes of the former.

This War of Mine, refreshingly, isn’t about combat either. While you can engage in violence to reach certain ends, getting to a position where you are able to do so, like much else in the game, takes time and dedication and really should only be used as a last resort – and even then stealth and subterfuge often prove to be more reliable means of getting where and what you need to. That said, basic kitchen utensils such as knives can be used as makeshift, if unreliable stabby tools, while fashioning firearms is a much more protracted activity, requiring you to not only scavenge the materials to craft one from an advanced workshop, but also to embark on the necessary steps to concoct the ammunition needed to turn an ornamental shotgun into a fully functioning boomstick.

The thing is, This War of Mine is not a game about violence – or at least, it’s not a game about *you* committing violence seemingly ad infinitum without any sort of reckoning. Don’t forget – you’re playing a civilian in This War of Mine who in a previous life before the war could have been a journalist, a baker, a schoolteacher, a homeless person or a stage actor – but certainly not a trained soldier. This means that confrontation with the fully armed, trained members of the occupying forces in This War of Mine is not recommended and more often than not ends extremely badly for all but the most well-equipped, well-prepared and militia-minded players. 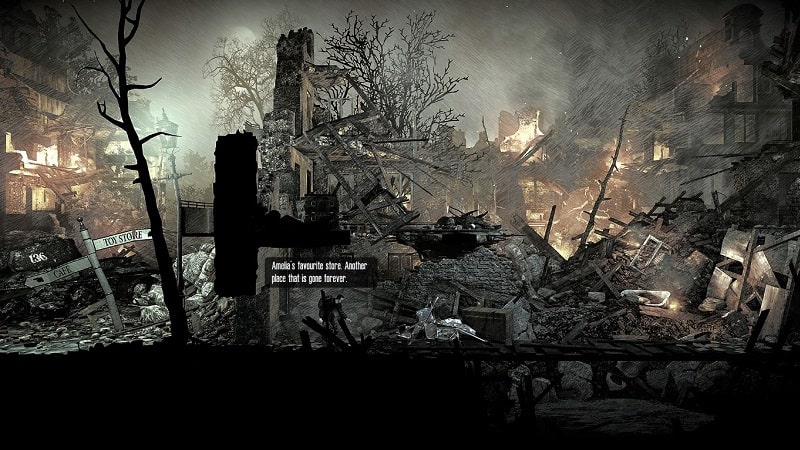 This War of Mine isn’t about winning, it’s about surviving – it’s about making the least shit decision you can in order to keep those closest to you alive and well all the while stumbling to something resembling freedom as the country, neighbourhood and people that you know die all around you in a thickening quagmire of tragedy and soul-devouring hopelessness. There’s nothing quite as affecting as This War of Mine and that’s a fact that remains as keenly true now as it did back in 2016 when the game made its bow on PlayStation 4.

Without a doubt, the biggest new innovation that This War of Mine: Final Cut brings to the core formula is the inclusion of the new ‘Stories’ mode, which provides three very different DLC expansions that each have their own narrative. Acting as a roundly compelling means for players that don’t normally play survival games to be easily ingratiated with This War of Mine’s range of sophisticated mechanics, each of these three stories also provides a more linear, more digestible take on the design and concepts that serve as the bedrock for the base This War of Mine experience.

More than that, each of these stories provides a tighter and ultimately more distilled take on the sorts of moral, heart-wrenching scenarios that the main game typically presents you with. From a father protecting their ill daughter, to the tale of a radio operator seeking to chase (and broadcast) the truth at all costs, these stories represent a superbly effective microcosm of This War of Mine that everyone should play first before they get stuck into the more sandbox-minded design of the main game. 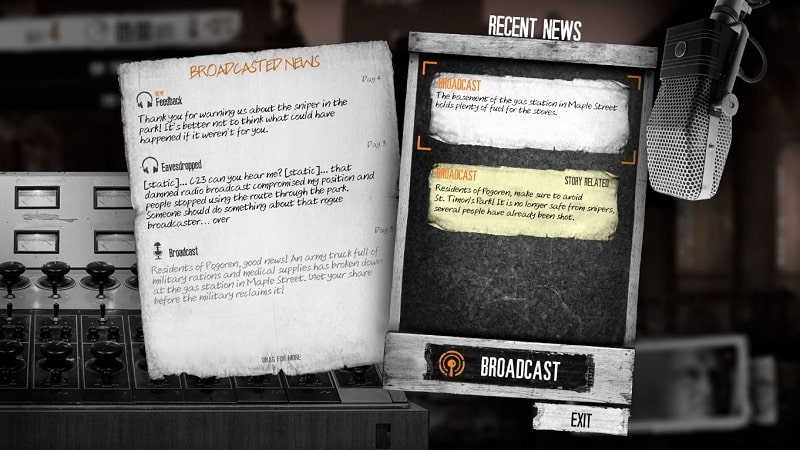 Another welcome addition that This War of Mine: Final Cut brings is the shift to a pin-sharp native 4K resolution presentation. With the much higher resolution bringing out the smallest of details in the muted palette that underscores its sombre subject matter, 11 bit studios grim survival masterwork has never looked better as the ruined urban husks, decimated streets, immolated houses and smooth character animation are all brought to a frankly frightening level of clarity and sharpness that the PS4 version just couldn’t achieve.

If there’s one drawback, albeit a slight one, to This War of Mine: Final Cut on PS5 it’s that the controls can prove a little fiddly when dealing with the availability of multiple context sensitive actions at once. So for example, if you see a staircase that is right beneath a ledge that you can leap up to, sometimes it can prove a little too tricky to either walk down the stairs or leap up to the ledge as the analogue stick controls just don’t seem precise enough to do exactly what you want to do in these sorts of situations.

An enduringly clever inversion of traditional survival genre tropes coupled with a palpably tragic and gut-wrenching experience, This War of Mine: Final Cut offers up 11 bit studios magnum opus in its perfect form. By packing in all of the DLC released to date in addition to the stellar Stories expansions and providing a pin-sharp 4K presentation, This War of Mine: Final Cut is an ageless, horrifying and inventive survival effort that everybody should play without delay. This is as essential as survival games get and 11 bit studios mediation on the desperate plight of civilians during a time of war has never been more resonant.